I have been a Macintosh user since 1986 but it is still necessary once in a while to access a Windows system and that is why VMWare Fusion is installed on my iMac which has a separate partition on its drive called BootCamp that contains the Windows system. There are different ways to set-up using Windows on a Mac, and I just prefer to have VMWare use the Bootcamp partition directly, and appear on my Mac screen as a virtual computer running within a Mac window.

Once in a while after a macOS update the Windows partition does not want to boot and VMWare says that I should create a new virtual machine from its “File > New…” menu.

The previous time that it failed it took a long time (days) to find the solution that simply requires to create a blank (empty) file called  boot.ini on the C: drive. (for more details: vmware.com)

Today I had the same issue but the solution was different as I already created that file previously. I simply noted that my Mac had been updated today when I logged in, and a new drive icon appeard called EFI which normally should not be visible (it is a partition within BootCamp that allows Windows to boot.) I also noted that when I tried to ask VMWare to create the new entry the only choice offered (and not changeable) was EFI.

I had the idea that if the volume was “unmounted” it would not be visible and perhaps VMWare would locate BootCamp instead. So I search for the unmount command, with inspiration from this web page from osxdaily.com. So I first listed the mounted volumes with diskutil list and located the one that had EFI within its name which provided the exact partition name. Then the command  diskutil unmount /dev/disk0s1

Now VMWare would offer the proper volume to create the new entry: 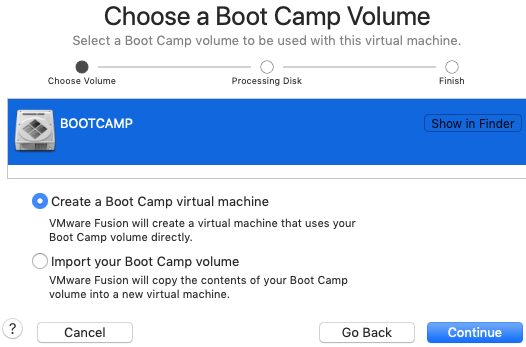 So it all works again… until the next update!

In fact I mistakenly tried diskutil unmount /dev/disk0 at first (rather than /dev/disk0s1 ) and got the following error:

Using this command unmounted both BootCamp and EFI but VMWare was still able to find the correct volume. The command in the text above diskutil unmount /dev/disk0s1 is the correct way to process, but the actual /devname may be different on another computer.

I later realized that perhaps the simple method of right-clicking on the EFI icon and ask macOS to “Eject” the disk would have probably have the same effect in a much simpler fashion!